Motel -1979
I saw an advertisement in the local newspaper for a Jazz Rock band who wanted a keyboard player. I think I was the only person who turned up for the audition because I learnt one song on the spot and was in the band.
Motel was a hard working band who on average played 5 or 6 gigs a week. Apart from playing music, Motel also liked to party with a capital P. The stories of people falling through ceilings when drunk, water fights, The Pope reading porno magazines and whiskey drunk by the gallon are all true. It was a great band to be in. 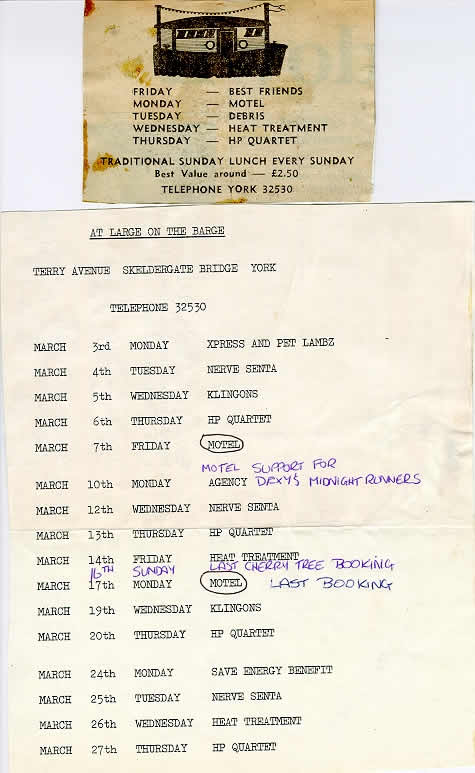 Motel is five-star --- and full and there is little room for improvement in the 11-piece band which boasts three brothers, three saxophonists, three attractive female  vocalists and an energetic lead singer.
Backed by a new agent, the York-based band - with a lead vocalist from Selby - is lining up for a recording contract. Meanwhile they are making booking of their own and proving popular with their own songs and rearrangements of traditional numbers.
Motel played at Cawood Park's Lakeside Bar recently when the 'Times' caught up with them.
There are three corners to Motel. Or Corner-Walkers to be exact. Andy, Jem and Patrick are the three brothers who made up the nucleus of the band in the beginning - four years ago.
Andy plays guitar and writes all the bands material, Jem plays sax and patrick is drummer. Making up the brass section with Jem are Tom Hume and Michael Andrews.
Wofflers
Ian Cole plays keyboards and Steve O'Donnell is bassist. The three girls with the backing vocals are Joyce Donaldson, Kasia West and Lynne Holt. And up front, leading the line-up is the singer with the short hair and the tall frame Andy Atkinson, also lead vocalist with Selby's The Wofflers Band.
The band was born in 1975 when Andy Corner-Walker returned from playing in the South. He was joined by his two brothers and bass player Steven and the group began to grow.
New members came and went and, 18 months ago when they passed a motel on the Tadcaster Road after rehearsals, the band decided to take it's name. Latest recruits are Ian, Joyce and Andy Atkinson. Now the newly-formed line-up is gigging throughout the York-Leeds area. Andy Corner-Walker who use to sing lead with the group, has concentrated on writing songs for them. The numbers are then arranged by the rest of the combo. They are being promoted by an agent and are, they say, turning "semi-professional".
"The band is not easy to categorise. We play a wide selection of music varying from television themes to rock'n'roll classics. and members come from musical backgrounds of folk, heavy rock and jazz," explained Andy. The three saxophones add a unique sound and the three-girl harmonies support Andy's singing well.
They kicked off with a number penned by Andy - "Wonder Woman". next was Ian Dury's number "Hit Me With Your Rhythm Stick". Tom, under red and blue lights,kept the quirky beat going with his sax as well as on the original track.
More home-grown songs followed, including " Sad Faced Friend" and "Africa". With a change of set came a change og clothes. The girls came on looking even better. Andy Corner-Walker looked smarter in a city suit and bowler. and Andy atkinson looked, well different.
Punk
Andy stood there in frayed denim shorts, wide-brimmed hat, no shoes and dark glasses. And he sang.
"Pick Up The Pieces" was the opening number, the girls backing up with maracas and tambourines and the saxophones generating a heavy beat.
Next Kasia took over the lead for a fine re-arrangement of "Nut Bush City Limits" before handing back to Andy for light relief and "Dixon of Dock Martins" - the nearest the band got to punk rock The number went down well with Andy donning a Fred Gumby style knotted handkerchief and the girls bobbing in unison.
A short interlude followed as the brass section worked around the "Starsky and Hutch" theme from television. Stevie Wonder's "Superstition" came up next followed by two of Andy's - "Al Pacino" and "Keylargo". Pat on drums, brought the set to a close with an impressive solo. But there was another to come. The girls did the hand jive, andy produced a lengthy cigarette holder and the band finished in fine style with the encore "Tulane".
Motel went down well. They have played in Leeds, York and Doncaster lately and will be appearing at Cawood Park again in the near future. Motel are looking for a booking that could lead to a room in the big-time.
And a message to any other up-and-coming bands. Mr Gerry Archer, of Cawood Park Caravan and Camping Site invites local groups, or individuals, to amateur informal musician nights each Sunday. 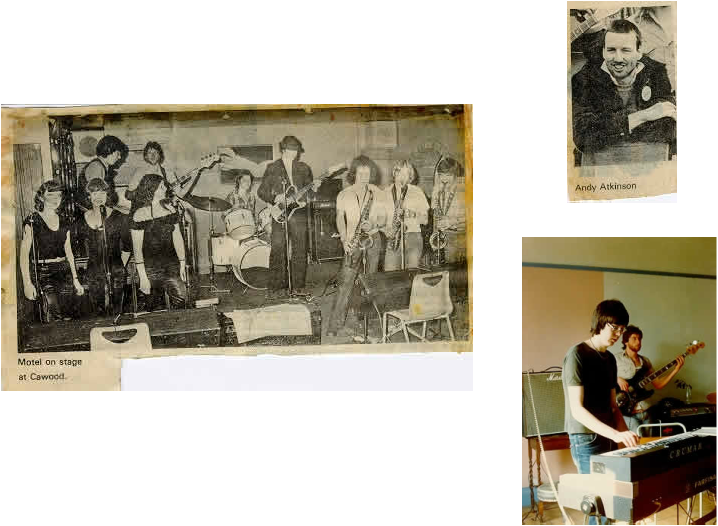 Motel -1980
After a year of playing with Motel musical differences started to appear with certain members of the band so I decided it was time to move on. Other contributing factors were the boredom of playing the same songs night after night and not making any money (most of the money generated by the band was kept to improve the public address system and never to be seen again).
I gave the group two months notice to find a replacement and played my last gig with them on the 17th March 1980 (you can hear the concert above). I still continued to keep in touch with one or two members of the band and when Andy Atkinson left I recommended his replacement Neil Thornham. I was also able to get them a radio spot on York University Radio.
​
Band Line-up:
Andy Atkinson: Lead Vocals (went on to join the group Bogus Brothers)
Michael Andrews: Saxophone
Ian Cole: Keyboards
Andy Corner-Walker: Guitar
Jem Corner-Walker: Saxophone (went on to join the groups "Bogus Brothers" and "The Goose Horns")
Patrick Corner-Walker: Drums (went on th join the group "You Slosh" )
Joyce Donaldson: Vocals
Lynne Holt: Vocals
Tom Hume: Saxophone
Steve O'Donnell: Bass
Kasia West: Vocals