Act One -
I got together with a Bass player Vince Mason and Drummer Alan Ashby after leaving Motel, we had tried to get a band off the ground before I joined Motel but we were unsuccessful. So this time we were determine to make it work.
Vince introduced a guitarist Pete to us and we found a singer (Mick O'connell) via an advertisement.
We got involved with a dodgy local local caricature who wanted to manage the band but wanted to sell and promote us via porn magazines, we would have to change the band name to Hardcore. We thought about it for a week then told him our mums wouldn't like it, so we declined the offer.

Pete the guitarist became unreliable and the band decided to fire him. I was tasked with the job of going round to his house and tell him, I knocked on his door and tried to explain the situation. Pete took this rejection very badly and threaten to punch me and refused to give me back my Complete Beatles songbook (He's still got it). Soon after this Mick the singer moved away - never to be seen again. ​

Product -
We decided to change the name to Product. Got in an ex-Motel guitarist (who I'd replaced on keyboards) Steve Bonner and we found a brilliant girl singer (Maggie Henderson) and Saxophone player Dave Dallison.
We embarked on playing a number of gigs around York, Leeds and Hull 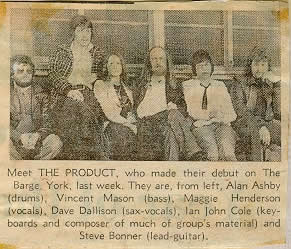 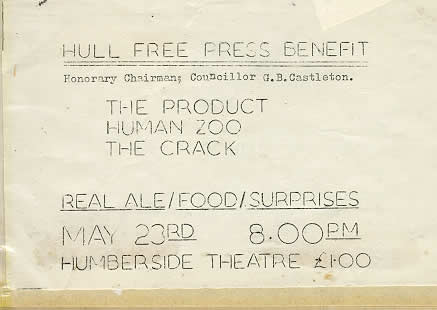 Songs Played:
Knock on Wood
It's So Easy
Trends: Ian Cole
Breakdown: Tom Petty
Who's Problem: The Motels
Dawn: Ian Cole
Teenage Dreams: Ian Cole
Where have all the good times gone: The Kinks
Woke up this morning: Ian Cole
Memphis: Chuck Berry
You're no Good

Equipment Used:
Farfisa Compact Duo Organ with matching 50 watt Amplifier
Crumer Roadrunner Electric Piano
​
We continued playing gigs for 18 months losing Dave the sax player along the way. Dave was a lovely guy who would never rehearse, he liked to just turn up at gigs and busk. he lived in a squat in St Paul's Square in York, it was a one room hovel with no hinges to the front door, overflowing ashtrays and rubbish everywhere. I did once go round for a coffee but was afraid to drink it because of what I might catch and poured it down the sink when Dave popped down the corridor to the shared bathroom.

I was working in a Builder Merchants (William Monks)  as a yardman and one of my work colleagues was the roadie for punk band UK Subs. He managed to get us a gig listing in the Record Mirror although when he phoned it through he couldn't remember the band name, so he called us Monk's Man Band (see clipping below) which was great for promoting Wm Monks but not Product.

I then I had an offer I couldn't refuse - to play with Nerve Senta who had management, were about the record their first album and had a lot of record company interest - so I left Product. The core of the band stayed together. I would later re-join in 1983 when the band was re-named  Dance Reaction. 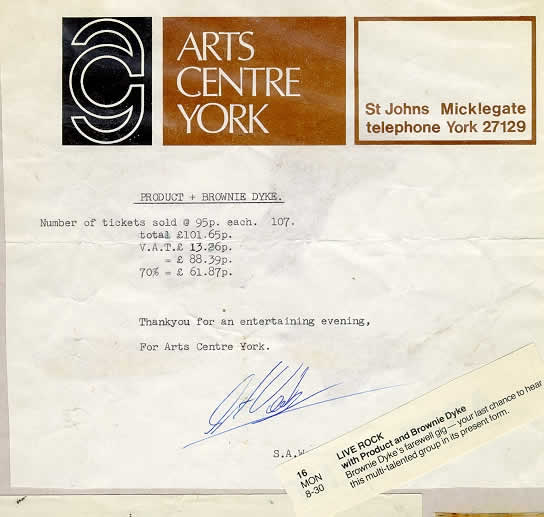