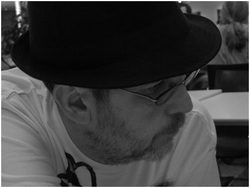 The Biography of Ian J Cole
Ian is a Composer, Musician, Producer and Sound Designer who has been working in the music industry since he signed his first independent recording contact in 1981. Over the years Ian has been commissioned to write music for Education, TV, Film, Software  and the Internet. He has also been involved in  writing pop, rock and folk songs for a number of artistes.

He lives in East Yorkshire, England and has studied for  Masters degrees in Multimedia and Education (2001) and  Music Technology (2011) which have allowed him to develop unusual methods of composition by designing his own software based compositional and music production tools. These tools are especially useful when it comes to the sound design compositions  that Ian creates.

Ian's music has been used and performed in France, Italy, Spain, Ireland,  The Netherlands, Argentina, USA and the UK which has culminated in him producing several solo and collaborative albums. Ian's music is licensed in American for TV, Film and the web by Muse IQ in New York and through Sinners Music Publishing in the UK and other Territories.

Ian is the founder of the Sinners Music, a UK based Record Company that was created predominantly for the projects that Ian is involved in but now releases the works of other artistes . Sinners Music has its own recording studio 'The Sinners Studio' that offers a studio-based or mobile recording service with competitive rates and a team of Producers and Recording Engineers at their disposal.
​

7th July 2020: The album Black Scars Across My Back is release on all download and streaming platforms.

1st April 2019 : The album 91st Day of the Year is released on all download and streaming sites.

9th Dec 2018: 'Deconstruction:Demolition:Reinvention' is released on All download and steaming platforms.

24th October 2014: Performed at Sonophilia 2014 Lincoln's Festival of Sound as part of the Sonic Arts Forum.

May until September 2011: worked on an album of experimental accordion music (have a listen to the album at Soundcloud and YouTube due for release March 2012)

May 2011: Submitted 'Chaucer's Lament' for the Soundwaves Festival in Brighton, England.

April 2011: Submitted 'Walking on Marbles' to the Museums at Night project at the SoundFjord Gallery,London.

May 2010: First performance of Chaucer's Lament using a 16 speaker ambisonic array at the Music Research Centre, University of York.


Group Work:
2020 until Present: Percussion and Electronics for The Stray Field

2008 until Present: Main songwriter and Producer for Katie and the Questions released one 4 track EP and album in 2012 available here

1988 - 91: Keyboard player, vocalist and songwriter with Art of Vision released You're Not Here cassette single and Cover to Cover cassette album (now deleted)

1985: Keyboard Player with  Too Hot To Handle

1980: Keyboard player and songwriter with Product


Study:
Sept 2009 - Sept 2011: Studied for an Masters of Art degree in Music Technology at the University of York supervised by Tony Myatt and Ambrose Field